15 June 2017
No Comments
10,680 Views
ALL Maritime Experiences
Coastal Communities
On the Water

Since the early 1900s the lobster fishermen of the State of Maine have been competing to see just who has the fastest boat. It began with sloops and evolved to power boats with the development of the internal combustion engine. First it was the make-and-break engines, which were followed by the typical automobile gasoline engine of 200 hp and now the boats are diesel powered with engines putting out as much as 1,200 hp. 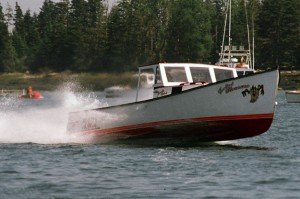 With the evolution of the engine also came an evolution in design. Initially the boats were long and thin, with a beautiful sheer and no house. As more power was introduced the boats got wider and longer with big wheelhouses, giving the fisherman much more deck space to work from. The 30 footer with a beam of 8 feet in the 1950s is now a 40 footer with a 16 foot beam.

Organized races were run as far back as the 1920s, but were not truly organized until the Beals Island-Jonesport race in 1963. Over the years more harbors have joined Maine’s answer to NASCAR. Formed in 2002, the Maine Lobsterboat Racing Association oversees races and hands out awards for five gasoline classes and 14 diesel classes at the end of the season.

There are a number of crowd favorites. The big winner over the last several years has been Galen Alley’s FOOLISH PLEASURE from Beals Island, which also set the gasoline and over speed record of 72.8 mph at Stonington in 2011. Another crowd favorite is Alfred Osgood’s STARLIGHT EXPRESS of Vinalhaven, which holds the diesel speed record of 58.9 mph set at Portland in 2010.

Watch Jon’s YouTube video on the Evolution of the Lobster Boat.