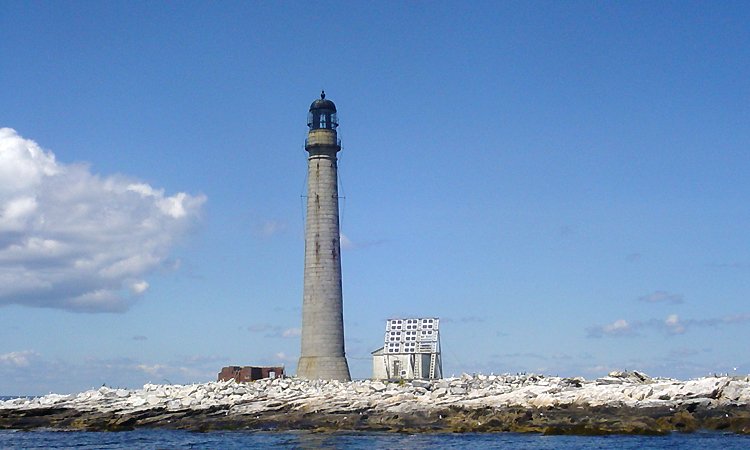 Address:
Boon Island, ME, Boon Island, ME 03902
Directions: NOT OPEN TO THE PUBLIC
Website: Visit the LightHouseFriends.com website for more information
Hours:

The tower is closed to the public and is best seen by boat. A flashing white light, visible for nineteen nautical miles, is emitted from the lighthouse every five seconds.

Boon Island Light is located on the 300-by-700-foot (91 m × 213 m) Boon Island off the southern coast of Maine, United States, near Cape Neddick. Boon Island Light has the distinction of being the tallest lighthouse in both Maine and New England at 133 feet (41 m). The lighthouse has a focal plane at 137 feet (42 m) above mean high water. The light's beacon flashes white every 5 seconds.

Talk of building a lighthouse on Boon Island dates back as early as 1710 when the ship Nottingham Galley ran aground on the barren outcrop that makes up the island. The crew of the Galley were forced to resort to cannibalism before being rescued. In 1799 the first day marker and the station itself were established on the island. In 1811 the station was converted to a full light station and a granite tower was constructed. The first tower along with a subsequent replacement were both washed away in storms.

The current cylindrical brown granite tower was constructed in 1855 and originally had a second orderFresnel lens installed. Boon Island Light suffered extensive damage in a blizzard in 1978. Several stones that make up the tower itself were washed into the sea as were all of the keepers dwellings and other outbuildings that had been on the island. As a result the station was automated in 1980 and a solar powered beacon was installed by the United States Coast Guard. The station is currently active and controlled by the Coast Guard while the lighthouse itself is on lease to the American Lighthouse Foundation.