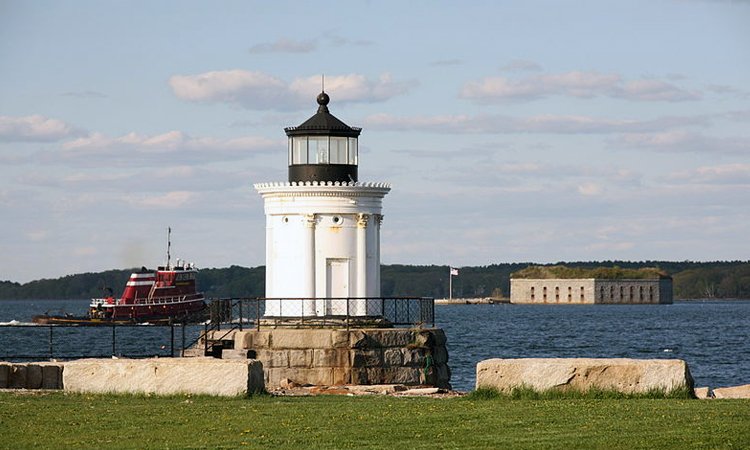 The lighthouse was first built in 1855, as a wooden structure, but the breakwater was extended and a new lighthouse was constructed at the end of it. The new lighthouse was made of curved cast-iron plates whose seams are disguised by six decorative Corinthian columns. Its design was inspired by the Choragic Monument of Lysicrates in Athens, made well known by engravings. The architect was Thomas U. Walter, most noted as the designer of the U.S. Capitol east and west wings and its current dome. Wooden sheds and a six-room house for the lighthouse-keeper were added incrementally as needed. In 1934 Spring Point Ledge Light was erected and the houses around Bug Light were demolished and the lighthouse keeper tended to both lighthouses. During World War II, the breakwater slowly receded, as the New England Shipbuilding Corporation built two shipyards next to the lighthouse. These shipyards produced Liberty Ships for the war effort. Because of the smaller breakwater, there was a lesser need for the lighthouse and subsequently was discontinued in 1943.