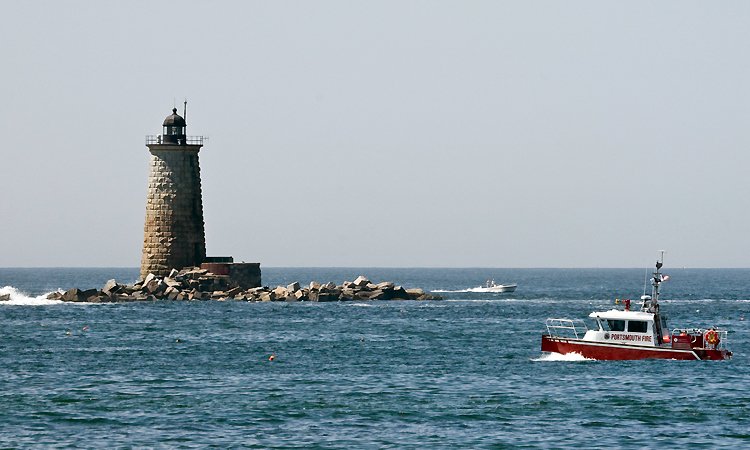 Address:
Whaleback Light, Kittery, ME, Kittery, ME 03904
Directions: CLOSED TO THE PUBLIC
Website: Visit this website for more information.
Hours:

This lighthouse can be seen from many spots on shore, including Fort Foster in Kittery, Fort Constitution, Fort Stark, and Great Island Common in New Castle, NH, and Odiorne Point in Rye, NH. The lighthouse is accessible only by boat and is closed to the public.

Whaleback Light is located offshore of Fort Foster and Wood Island in Kittery, Maine, at the entrance to the Piscataqua River and Portsmouth Harbor.

The station (known in early records as "Whales Back") was first established in 1820. In 1829, a replacement was built for $20,000. The tower was upgraded in 1855 with a new lantern and a fourth order Fresnel lens. A fog bell and tower were installed in 1863. In 1869, storms had caused cracks in the tower and foundation causing the decision to build a new tower in 1872. The new tower was built with dovetailed granite blocks alongside the original tower, which was removed in 1880. At some point the fog bell was replaced with a horn and in 1991, the volume of the horn was reduced because it was damaging the integrity of the structure.

The current lighthouse exhibits two white flashes every 10 seconds and is created by a modern VLB-44LED light, which was installed in October 2009.

In 2007, under the National Lighthouse Preservation Act of 2000, Whaleback lighthouse was made available to a suitable new steward. The American Lighthouse Foundation and its chapter Friends of Portsmouth Harbor Lighthouses submitted an application and in November 2008, became the new owners.