17 November 2015
No Comments
1,324 Views
Maine Maritime News
Forty years ago, Captain Noah Barnes was a nine-year-old boy watching his parents, Captains Ken and Ellen Barnes, completely rebuild an historic schooner that would become a beloved member of the Maine Windjammer Association—the Stephen Taber. Now, forty years later, after owning and operating the Stephen Taber for more than a decade, Captain Noah is elbow-deep in a rebuild of a different schooner—Ladona—a vintage 82-footer originally built in 1922 in Boothbay Harbor, Maine, as a private yacht for the Loring family. 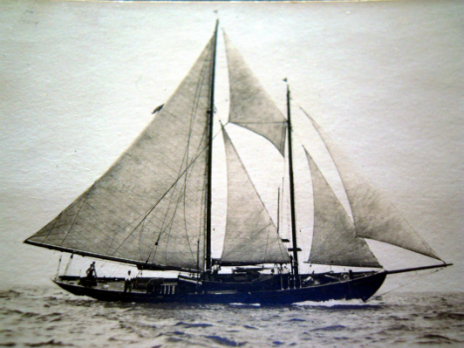 Ladona has had a long, winding history. Once her tenure as a yacht had finished in 1942, she was enlisted by the US Coast Guard to keep watch for U-Boats off American shores during World War II, earning both the Victory Medal and the American Campaign medal. She had a stint as a fishing dragger, a training vessel and then finally joined the Maine Windjammer fleet in 1971 under the name of Nathaniel Bowditch. When Captain Noah and his wife, Jane, bought the schooner in 2014, they knew that she was in desperate need of a rebuild. It’s been a multi-stage process involving a team of master builders and many months out in the cold under a tarp making certain she’s built to perfection.