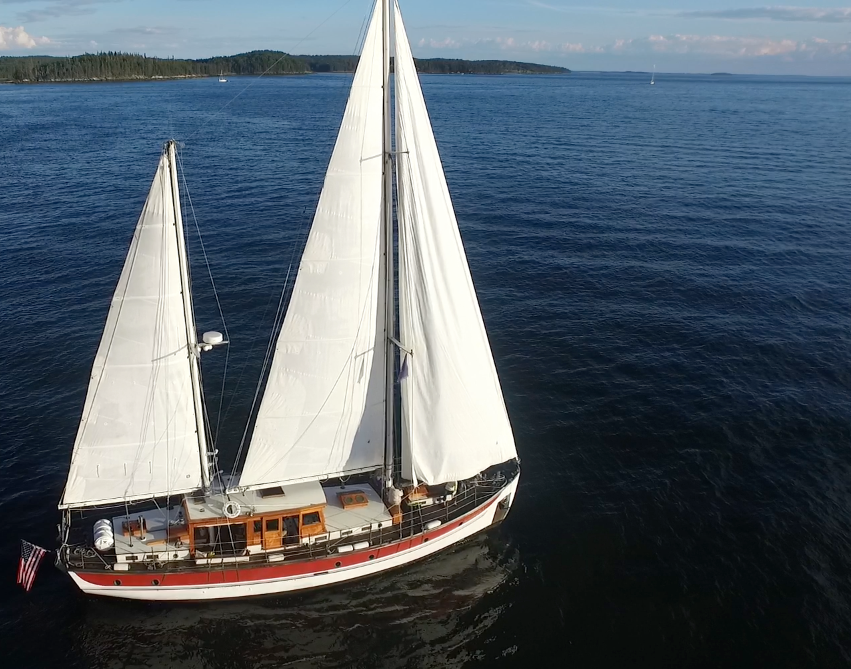 Check schedules and rates at: http://www.guildivecruises.com

Come feel the crisp sea air and enjoy all the beauty of the Maine Coast aboard our vintage yacht. All sails include light refreshments and guests are welcome to bring a picnic or their own beer or wine.

Designed by William Hand Jr. Guildive was constructed in 1934 at the Wheeler Shipyard in Brooklyn, NY. Built for the Fish family, as a private yacht, she was originally launched as Restless and has sailed under the names Istar II and Sixpence. At 56’ long, 14.5’ beam, and 46 tons she is a grand and stable motorsailer.

Castine, Guildive’s homeport, is one of the most unique and important harbors on the coast of Maine. The region was first valued early in Maine’s history because of its deep-water harbor and fresh water access. It was the focal point in the Revolutionary War Penobscot Expedition of 1779 and the War of 1812. Fort Pentagoet, Fort George and Fort Madison remain and there are many interpretive signs identifying historic landmarks. Now home to a quiet village rich in Elm Trees, beautiful architecture and the operational Dices Head light house, Castine is a charming vacation destination. Other attractions include the Maine Maritime Academy which has been preparing world class mariners since the Second World War, the Wilson Museum, a historic golf course, inns and quaint village shops.

Aboard Guildive you will sail alongside the Academy boats including the tug Pentagoet and the Schooner Bowdoin experiencing Castine from the water.

During the 19th century the port of Searsport built over 200 ships in its 17 shipyards and supplied the nation with many of its deep-water sea captains. The port is situated on the north end of the Penobscot Bay with a protected deep-water harbor and is still used as a commercial dock for tankers. To preserve the history of the town Searsport is home to the Penobscot Marine Museum, a beautiful collection of the Bays maritime heritage. Be apart of Searsport’s history by arriving by boat.